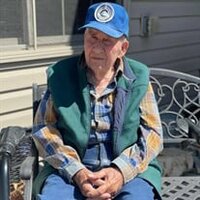 William "Bill" Jesse Van Valkenburg, 90, of Cloquet passed away on October 4, 2021, at Diamond Willow Assisted Living facility. Bill was born in Long Prairie, Minnesota on March 18, 1931 to William and Lela (Hall) Van Valkenburg. Bill was a great guy; a hard-working, gentle and kind man. While Bill never had children of his own, he was a loving father and raised many stepchildren from his two marriages. In 1953, Bill married Violet (Fisher) Rowell and enjoyed 22 years of marriage. Bill's talents as a gardener shown bright during these years. One of the favorite activities of visiting him and Vi was being taken out to the gardens. Bill loved to share his knowledge of and love for gardening. His grandkids particularly loved this as they also got to feast on the bounty during these outings! Bill also loved to hunt and fish. A favorite highlight of his fishing days was his two-week trip into the Boundary Waters. His eyes sparkled when he talked about this trip where he met Dorothy Molter and swapped some of his food for her root beer! Following Violet's death, Bill met and married Marjorie Esko and they spent the next 41 years together as inseparable partners until her death. Through the years, Bill became an expert carpenter and handy-man. During his retirement years, he and Marge lived in many houses that began as fixer-uppers (one even started out as a chicken coop!) but through their skill and hard work, were remade into fine homes. Bill worked at and retired from Potlatch Paper in Cloquet, starting back when it was known as Northwest Paper. After retirement, he and Marge travelled all over the U.S. and lived in various states, including Washington, Arkansas, Idaho and Minnesota. Bill was preceded in death by his parents, William and Lela and his stepmother, Bertha (Quistorff) Van Valkenburg; his brother, Richard; and sister, Jean; wives, Marjorie and Violet; and stepchildren, Shirley Hunt, Janice Ratliff, Linda Rask and Brian Loucks. Bill is survived and will be dearly missed by his many relatives and friends: sisters, LaVonne Nelson of Wisconsin and Joan Lanquar of Missouri; stepchildren, Jean Youngdahl of Duluth, David (Sharon) Rowell of Duluth, Dennis (Dolly) Rowell of Duluth, and John (Erin Klinger) Loucks of Alaska; many grandchildren, nephews, nieces, and close family friend, Debby Johnson who stepped in and cared for Bill like he was her own father. Her friendship and care meant a lot to Bill. And finally, the staff at Diamond Willow Cloquet. While they are the last on this list, they are certainly not the least. The care he received from the wonderful people at this facility was outstanding! They not only provide daily care for their residents, but they truly love them, too. They were a tremendous comfort to Bill and to us, his family, knowing he was in such good hands. At Bill's request, there will be no funeral. His friends should remember the good times shared with Bill throughout his life. As a lifelong farmer and lover of animals, memorial donations may be made to Future Farmers of America at FFA Willow River, 8142 Pine Street, Willow River, MN 55795; or Animal Allies Humane Society at 4006 Airport Road, Duluth, MN 55811.