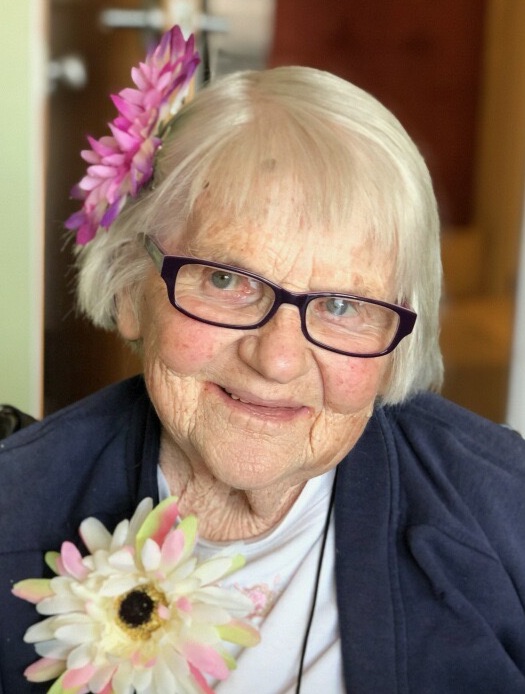 Described by her father as “a peach of a girl” on the day she was born, May 27 , 1929, Anita (Nelson) Anderson peacefully passed away on November 4, 2021. As a child of Finnish parents  living on a farm, Anita was curious, thoughtful and a lover of animals. In 1947 she graduated from Esko High School as the class Valedictorian. She worked at the Esko Co-op Store, serving the farmers in the area, and later moved to Cloquet where she met Raymond “Hank the Barber”. They married in 1956 at Zion Lutheran Church, Cloquet, a touch-stone of her faith for over 50 years.  Anita and Hank built a life centered around the outdoors, their children, having a sense of humor and living a “simple” life. Family and friends remember her as creative, witty, and careful with her words. To her delight, this strong woman chopped her own wood, cooked remarkable meals on a cast-iron wood stove, joyfully played on the floor with her grandchildren and cross-country skied into her 80’s.  To her children and grandchildren, she modeled Finnish SISU and “what mattered” in life-family, loyalty, kindness, embracing the outdoors, gardens, sauna and conversation over hot coffee. Hers was a life well lived for 92 years, and she continued to her last days as a “peach of a girl”.

Anita joins a chorus of family and friends in her passing, including her husband Raymond W. “Hank” Anderson; her parents, Charles and Lydia (Saukko) Nelson;  her sister, Mildred (Pete) Bottila; and dear niece Jane Sheehan.

Surrounding her as she passed were her children; Mark (Kay) Anderson, Greg (Lorrie) Anderson, Jody (Mike) Acers and special niece, Janice (Kenie) Spieler ,as well as the many staff members, who became family, at the Sunnyside Health Care Center. Those who called Anita “grandma” include; Eric Anderson, Bryan Anderson, Josh (Katie) Terwey and their children Jake and Avery , Jenna Anderson, Emily Acers and Andrew Acers.

A time to remember and celebrate Anita’s life will be held on Friday, November 12 at Zion Lutheran Church, 1000 Washington Avenue, Cloquet, MN. Visitation begins at 11:00 am, followed by the memorial service at 12:00 noon. Lunch to follow. Arrangements are entrusted to Atkins Northland Funeral Home. Memorial gifts preferred to Zion Lutheran Church or Sunnyside Health Care Center, Cloquet.  To sign the guest book and leave an online tribute, see www.atkinsnorthlandfuneralhome.com

Share Your Memory of
Anita
Upload Your Memory View All Memories
Be the first to upload a memory!
Share A Memory