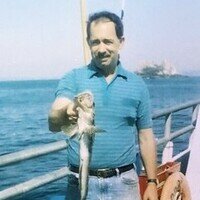 Rubin Baxley, age 80 of Chancellor, Alabama died Thursday August 25th in Wright, Minnesota surrounded by loving family. Rubin (Mitch) was born in Florala, Alabama on December 27, 1941 to Edney Lee and Nina Mozel (Chancellor) Baxley. He lived in Alabama and Florida most of his childhood, helping his family on the farm, playing with his brothers and sister and fishing. He Married Karen Bakken on December 9, 1972 and they traveled the country together working side by side. They settled in Corpus Christi, Texas, were self-employed, and raised two children. Though they divorced they remained close friends. Rubin loved to spend time with family, travel, invent, fish, write songs and poetry, but most of all he was never a stranger to anyone he met. He could strike up a conversation and before you knew it two hours had passed.

Later in life he settled in Chancellor, Alabama where he spent a lot of time with his sister along with other family, neighbors and friends. There he worked on his homestead, avidly researched on the computer to learn about anything and everything and wrote several more poems, stories and songs. He was a part of the neighborhood watch in Chancellor. He loved to go to the café to have coffee and talk with some of the ol’timers. Reading the bible and any other history books was one of his favorite past times.

Share Your Memory of
Rubin
Upload Your Memory View All Memories
Be the first to upload a memory!
Share A Memory