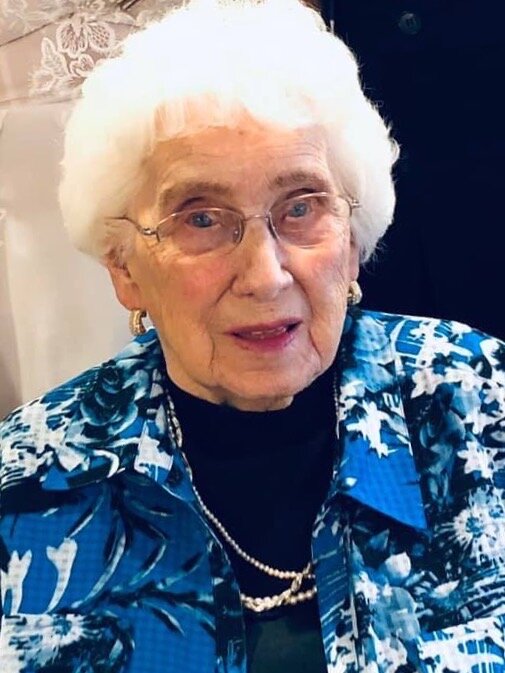 Marianne Jeanette (Carlson-Dion) Golen, 98, of Carlton passed away peacefully on Monday, September 12, 2022 at Inter-Faith Care Center in Carlton.  She was born on July 29, 1924 in Cloquet to Oscar and Tilda Carlson.

Marianne was preceded in death by her parents, Tilda and Oscar; her husband, Howard Dion; her sisters, Edith Carlson and Margaret Anderson; her brothers, Sigard, Edwin “Hook”, Walt; and her step-brother, Harry Carlson.

The family is eternally grateful for the kindness and care provided to Mom by the wonderful CNA’s, nurses, activities and all the staff at Inter-Faith Care Center.  Special thanks to St. Croix Hospice for the comfort and support to our Mother and our family.

Thank you Cheryl Winterquist and Janelle Brant for helping our Mother and our family through some difficult times.

My Mom will be missed by many.  Keep the wonderful memories of her always and share them with others.

She loved movie stars and met many, including Gene Audrey (her favorite at the time).  She collected pictures and had many memories to share with us.  Later she played softball on the Cloquet Merchants team.  She won several tournaments playing volleyball.  She also had many trophies in golf and won the City Doubles Bowling Tournament with Bonnie Newton.  She loved to travel.  Her favorite trips were three times to Hawaii.  She went to Chicago, California, Georgia, Mexico, Michigan, Las Vegas, Florida, Branson, Wisconsin and more.  She loved to talk about her trips.  Marianne also loved to fish and enjoyed many trips with her family.  She loved to play cards and games (for money) and bingo which she won many times.

She enjoyed her three children and her family.  She loved company and enjoyed feeding them and visiting with them.  She will be missed by them and always remembered.

A private ceremony will be held at a later date.  Arrangements entrusted to Atkins Northland Funeral Home, 801 14th Street, Cloquet.

Share Your Memory of
Marianne
Upload Your Memory View All Memories
Be the first to upload a memory!
Share A Memory