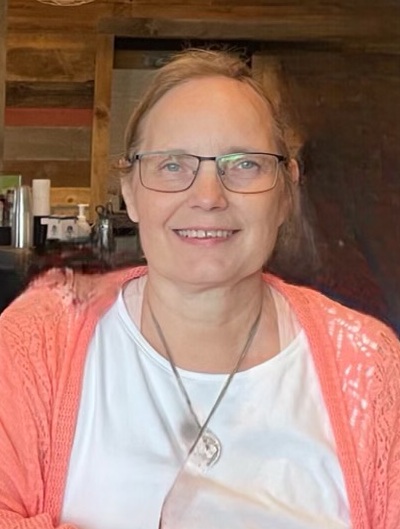 Trisha worked for many years in the hospitality business in Laughlin, NV.  She and Tony also owned and operated Kamper Kompanion in Litchfield, IL in the early 2000’s.

She was a member of the Women of the Moose.  Trisha enjoyed cross stitch and knitting.

Trisha was preceded in death by her parents; and her husband, Anthony Wallin.

Trisha was a special gift to all who knew her.  She persevered and kept a course on which many would have faltered. She was resilient in action. She was sweet. She called you honey or babe. You felt loved by her and knew she supported you always. She succeeded mostly at being the kind hearted person everyone needs in their life.

Trisha met the love of her life,Tony, many years before they married in September 1994.  They embarked on a journey together. They zigged when most would have zagged. They lived their life on their terms and were not afraid of a new challenge, a new destination or place of solitude. Whatever they may have seemed to the world, they were each other's world.  Trisha was as devoted to Tony as he was to her.  His illness brought them challenges, but he helped her as he suffered and she responded with care, devotion and deep respect for her one true love. As they did all things, they were together as he passed.

Trisha's life after Tony was a sort of emergence of another iteration of herself. She became her own advocate, she heeded his advice on what to do once he was gone. It seemed as though her butterfly wings sprouted and she started to fly on her own in her own beautiful style.  Trisha wasn't alone. She took time to reconnect with her family and remained invested in her in-laws.  She was an equal opportunity love as she steered her own new course.

It is sad that this new course was cut short in such a tragic fashion.  We know she died protecting her much loved cousin and partner in shenanigans, Karee.

We know she would not change her actions, or look on them in regret. She was fierce and was doing what was right in the moment.

Her family holds her memory dear and are grateful for the lessons in selflessness she lived out and from which we all can learn.

Visitation: 10:00 a.m. until the 12:00 Noon memorial service on Saturday, January 14, 2023 in Bethany Lutheran Church in Cromwell.  A luncheon will follow in the church fellowship hall.  In lieu of flowers donations are encouraged to a domestic abuse charity of your choice.  Arrangements entrusted to Atkins Northland Funeral Home, 801 14th Street, Cloquet 55720.  To sign the guest book and leave an online tribute, see www.atkinsnorthlandfuneralhome.com

Share Your Memory of
Trisha
Upload Your Memory View All Memories
Be the first to upload a memory!
Share A Memory