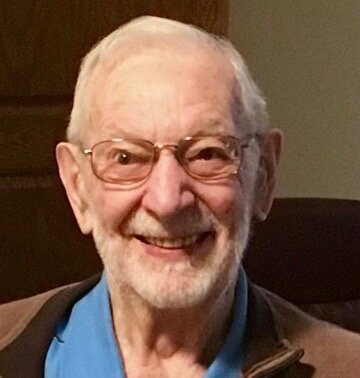 Maurice Ray Iliff was born on February 5th, 1927, the third of 5 children to Frank Ray and Alice Etha “Tillie” (Kuhn) Iliff, in Nashville township north of Granada MN in Martin County.  He was raised on the family farm and loved horses, often speaking fondly of his horse Captain.  Maurice attended Huntley High School where he was a member of the basketball team, graduating in 1945.  He served in the Army in the Korean War driving a deuce and a half truck resupplying the front lines.  He was honorably discharged with the rank of Corporal in 1954.  After returning home he married Shirley Ann Zentner on Sept. 23, 1955, in Fairmont MN.  They worked small family farms in Nashville and Center Creek townships in Martin County, MN and Verona township in Faribault County, MN.  Three children, Kathy, Cyndee, and Kevin were born to them, while their niece Janet Hiatt joined the family after her parents passed.  Maurice retired from farming after the 1993 season, and he and Shirley moved to Barnum MN in February 1994.  In his retirement he enjoyed spending time with his grandchildren, fishing, volunteering, and being a good neighbor.  He and Shirley moved to Suncrest assisted living apartments in Cloquet MN in 2012, and later moved to Interfaith Care Center in Carlton MN in 2017.  Maurice and Shirley achieved 65 years of marriage before Shirley passed in 2021.

He was a member of Congregational Church of Granada, American Legion, Barnum Community United Methodist Church, and Winnebago City Lodge #30 of the Independent Order of Odd Fellows.  He will be remembered for his generous nature, his work ethic, and especially for his devoted care to Shirley as she faced living with Parkinson’s disease.

Maurice was preceded in death by his wife Shirley; his parents Ray and Tillie Iliff; his siblings Robert Iliff, Irene Richison, Jack Iliff, and Leota Borger; and his son-in-law Harold Grabouski.

A memorial service will be held on December 17, 2022, at 11AM at First Congregational United Church of Christ, 319 Downtown Plaza, Fairmont, MN, with visitation 1 hour prior to the service.  Burial of Shirley at Center Creek Cemetery, Granada MN and Maurice at Riverside Cemetery, Winnebago MN will follow the service.  Due to the distances travelled by the family, and the difficulty in transporting flowers, the family is requesting no flowers be sent.

Share Your Memory of
Maurice
Upload Your Memory View All Memories
Be the first to upload a memory!
Share A Memory